I’m going to try this new series out, Nom Nom Nom, in which I try a recipe, no matter how cliche or banal, and see if I can at least do it, and, maybe even spruce it up a bit. The best part will be the pictures!

For my first “Nom” I will be making Rice Krispie Treats. Sounds easy enough right? You would be wrong. The first–and last– time I made these marshmallow squares, they became so hard and untempting the birds i left it for in the backyard wouldn’t even touch them!

On that note, let’s forget the old and think positively. Here’s the recipe:

*Note: you can use marshmallow creme, but it tastes so much better with fresh marshmallows!

Now, I am a big proponent of the adage “a watched pot never boils,” so I threw the butter in a pot on low heat, and “forgot” about it. Special note- as much as you want to go fast so you can nibble off the remnants in the bowl, use LOW HEAT to melt the butter. You don’t want burnt-tasting treats, now do you? The best food takes as long as it takes. Sounds cryptic, but while you’re staring so intently at butter trying to melt you will know what I mean.

Once the butter is melted, add the marshmallows little by little. I alternate between letting them melt, and stirring the butter and marsh-goo together. When the marshmallows are fully melted into a cream (no lumps), add the rice cereal. Use a strong spoon to stir this crazy mish-mash until fully blended. Pour mixture into a 13×9 inch baking pan (for thicker treats, use an 8×8 pan) and spread out using wax paper on top. Before they cool completely, I sprinkled M&M’s on mine for an extra chocolate treat! 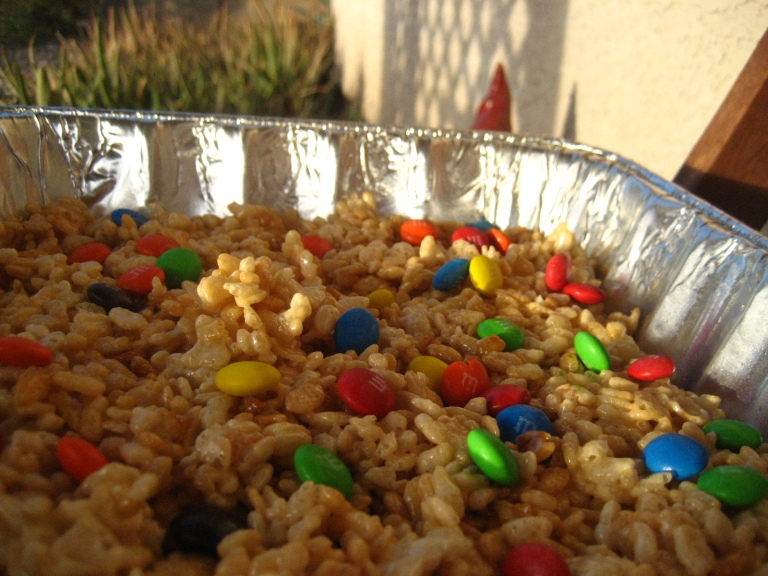 yes, this was taken in my backyard with my gnome eyeing it.

It was a hit at the party we threw, although now I know we should always make double if not triple batches!

What is your favorite comfort treat?