Self-portrait goddess, empowerer of women, muse to many, Katelan Foisy is a an artist with a true beautiful heart. What started as pictures for references and her own art became a way for her to get others to look into themselves, maybe even heal, as well. I got a chance to interview her, and here is what she had to say.

Why did you start your self-portrait project?

I started They Be We (TBW) for a few reasons.  As a visual artist who works late in the evening and is concerned about copyright  I started by taking reference photos of myself and using them in my pieces.  As I got more into this process I found myself having ideas for photo shoots and wanting to work in a different art form.  I started with a few underwater shots, one of which became the cover of the TBW book.  This one image turned into a series inspired by Ophelia.  I was in a dark place at the time and wanted to convey what I was feeling, out of it came something beautiful.  I began looking at the pictures and noticing parts of myself that I didn’t realize were there.  From there it became a self exploration project.  I began posting the images online and the response was overwhelming.  Women started to write me emails telling me how inspired they were by the photos and wanted to emulate them.  That is when I got the idea for the book. Many women that I knew were going through some difficult times and some creative slumps.  I figured by introducing a new art form as well as self therapy that my friends could work through their own issues as well as tap into their own creative process.

How has it impacted your life?

This project has been amazing.  I not only have discovered a love of photography but have regained my sense of self esteem. When I started the project I was really struggling with the idea of image.  Taking the photographs has helped me regain that. It also provides me with a creative outlet when I fall into a slump. It also makes me incredibly proud that the women involved have been so enthusiastic.  A lot of them had never taken a self portrait and this gave them the opportunity to play with their cameras, be the art director as well as the model and portray themselves in ways they never thought imaginable. Sometimes women get nervous or shy in front of a camera but in a self portrait you have complete control over the situation, if you don’t like an image you erase it.  It’s as simple as that.  I am very blessed to have such wonderful people involved in this project. It also made me realize how important my female friendships were.

What is the next step for you as a photographer and curator of fabulous photos?

I’d like to get some galleries involved with the project but my big hope for TBW is for women to take the project and make it their own.  I’m encouraging anyone who is interested to create their own self portrait collective. On the blog I created a “start your own” page and I’m hoping that other women will be inspired to do this themselves.  Amanda (one of the members of the collective) has started a facebook group, twitter (with twitpic) as well as a flickr page.  Anyone is welcome to join these as well.  As for me I have a few shows lined up that I will be posting about in the blog at a later date.  Some of the women have been asking me about TBW Volume 2.  Right now I’m focusing on the first book and perhaps in the future we’ll put out a call for entries.

Where or from whom do you draw inspiration?

I’m constantly inspired by the world around me but as far as photographers I would have to say Cindy Sherman is a huge source of inspiration and Katie West is amazing.  But what gets me most is black and white photographs.  I love grainy black and whites of Anais Nin, June Miller, William S. Burroughs, and Jack Kerouac.  I also love the photographs taken of the punk bands in the late 70’s early 80’s.  To me, that is where all the magic happened. Photographers like Roberta Bayley, Bob Gruen, and Jill Furmanovsky, they knew how to capture a moment.  I’m also inspired by people who use cheap materials to make something extraordinary.  My friend Swoon used paper, ink, and wheatpaste to post up her drawings on the streets.  I’ve always been inspired by her work because it became a few different art forms.  As the paper started to decay, that itself became an art form, if you took a photograph, it became a third.  I’m fascinated by art that takes you into a different world.  I’m also fascinated with Polaroid film and holgas.  I love the idea of taking a cheap camera and making something amazing from it.  One of the things that was so inspiring about this project was that many of the girls used regular point and shoot cameras.  I wanted to make it as accessible as possible.

Do you feel that living in NYC helps with inspiration?

You know, I just recently fell in love with New York again.  When I first moved here in 1997, I was looking for the grit of the 80’s.  I was supposed to move to the Lower East Side with my then fiance but didn’t at the last minute.  He passed away that year and I didn’t go back for a long time.  Then about a year ago I wandered back and started to feel something again.  There is something about that area, that even though there’s been major changes and gentrification, there are parts that have kept their identity.  I fell in love with those parts again and it’s become a major inspiration in my life.  We also have amazing museums and galleries here but my real passion lies in the streets.  I’m happiest when seeing really good street art in a decrepit alley.

What does your family think of all your artistic endeavors?

My family is extremely supportive of everything I do.

Always lovely to hear. What are some of your favorite photography sites?

I usually like photographers individual sites.  I’m a big fan of Chad Michael Ward, Viva Van Story, Richard Kadrey with Kaos Beauty Klinik, Bunny Yeager, Austin Young,Paule Soviano and David Lachapelle.  Oddly, most of the photographers I come across are from books or friends’ websites.  I do however like to peruse the photographs on flickr and jpg mag.

Have you seen the Warriors?

I LOVE the Warriors!  One of my favorite movies ever!

What’s with all the belly dancing stuff?

Sherene and Blanca are both belly dancers and I’ve always wanted to be one.  I live vicariously through them.  They put on a bunch of amazing performances and are getting ready to release a vintage belly dance dvd that they filmed in Morocco.   Just this evening they put on the Vintage Belly Dance show.  It was amazing, the storyline goes like this (in Sherene’s words) Vintage Bellydance takes us to the set of director Michel’s latest project, in a studio in Egypt, around 1959. Michel is holding auditions for his latest project, as he needs to find a replacement for his lead actress, Kalthoum–a superstar, who has gone missing. Michel sees six young dancers: the ingénue, the gypsy, the siren, the diva, and even his wife, in hopes of finding a replacement 4 his star. Will Kalthoun show her face? What is the future of Michel’s film? Vintage Bellydance takes us behind the scenes of Michel’s film in order to explore the real lives of these diverse vintage starlets, through their dreams and their realities. It was really fantastic to see all the little subplots of the show come to life and watch my friends do what they do best.

Have you thought of making a HTML badge for everyone who has added their self-portrait to your project for flickr or their own sites?
I have.  I’ve been looking up HTML in my spare time but I think I may hand this one over to one of my friends that actually knows HTML.  I get a little cross-eyed doing it.

And finally, what is your favorite dessert?
I have a huge sweet tooth.  I think my favorite dessert hands down is cupcakes. I love them so much I bake them every week and add all sorts of sprinkles and designs to them.  If anyone ever wants to make me happy, they should give me cupcakes.

A couple of my favorite self-portrait artists: yyellowbird, lucia holm, and of course, Gala Darling.

I decided to ask some of my friends and family members to take a self-portrait of themselves for this article, only telling them that it was for my website, and here’s what I received:

From the ever-sassy sister of mine, a duplicitous, yet still beautiful picture:

From my tiny and quick-witted, surprisingly thoughtful cousin Jennifer: 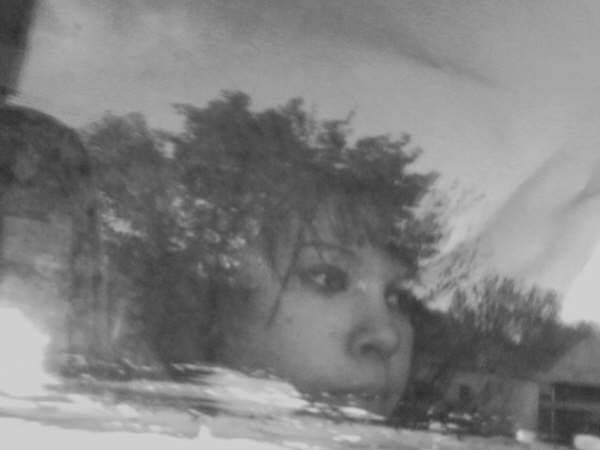 From my lucky star and straightforward mama Annise: she also says “it represents me in that on the left you have the kitchen, symbolizing where I work and my wanting to be domestic and settle down..but yet on the right u have the pool table symbolizing my wild side still wanting to be young and play.”

And last but not least, my friend Connie. I was surprised by her choice, and yet I completely understand.

Life of the party and always happy, there is always a side to everyone that needs a hug and healing. I love you.

Thank you ladies for giving me (and the readers) a peek into your self. And thank you Katelan for helping open us up.

Need help with your own self-portrait? Check out her awesome post about her tips and tricks.