The ongoing Gwen Bell “Best of 2009” idea continues with: What was your favorite restaurant experience this year? 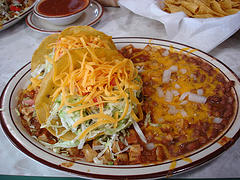 Hands down: Sadie’s of New Mexico in Albuquerque. It’s one of those places the locals go, so you know it’s good. We waited about an hour and a half. By then we had built up what it was going to be in our minds and thank the Gods of Mexican Food, it didn’t disappoint.

They’ve won awards and garnered tons of press, all well-deserved. Their salsa is some of the best I have ever had. I’m no salsa connoisseur, but let me tell you a little bit about this reformed picky eater: I Hate Tomatoes. I’m glad that’s out in the open now. That being said, I do not like when my salsa tastes like tomato paste. This salsa was an inferno of magic. As soon as you put it in your mouth, it envelops it and your throat in spiciness. But as soon as you finish eating one chip, you immediately go back for more. It’s just that tasty.

If you don’t believe me, order some and try for yourself.

Being the picky eater that I am, and still pouring face-numbing salsa into my face, I decided to play it safe with just a bean + cheese burro. Notice it isn’t a burrito, a small burro. It was the burro that burritos aspire to be. As big as the oblong plate and bursting, there was cheese on top of it, as well as inside.

I took a bite and gazed inside and thought I saw a dealbreaker. But, what I thought were diced onions (the HORROR!), was actually chopped up potato. Sadie’s, I salute you. I had never even thought of that!

A sort of aside: the busboy that brought us drinks and chips was AMAZING. He was this young kid and although that was probably not his dream job, he busted a** like it was the best job in the world. The Beau and I wrote notes on our bill to him and how we appreciated him. We even tipped a little more because of it.

If you ever find yourself in the Q, go to Sadie’s.