When I was younger, I had an envious curiosity with redheads. There weren’t many in my classes (I can probably count on one hand the amount of naturals I have met), so whenever I saw one, I was transfixed. I wanted to play with their hair, see if it smelled like strawberries. I even had a redheaded Cabbage Patch Kid, and no others. Redheaded kids seemed made for the sunlight. Well, when i was little that’s what I thought. They seemed like a magical, freckle species that would get happier in the sun. As I grew I learned that, turns out, they just got burned and frecklier in the sun. I recently did some reading on the subject of redheads, and found out some pretty surprising things that people throughout the ages have thought about redheads. 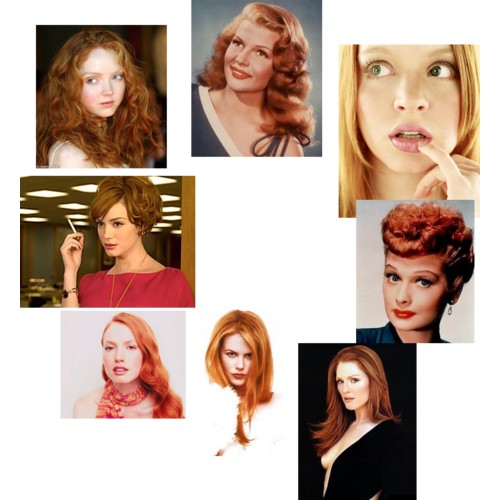 I decided to do a little reactionary questionnaire with my friend Sarah (a lifetime redhead), to see what she thought of some of the old wives tales, facts and things-of-note about redheads. Here’s what she had to say (in bold)

How long have you been a redhead? 26 years

Do you have any experiences, good and bad, about being a redhead? Good, people always tell me I am exotic because redheads are always ugly and I am not. I get a lot of dates that way.

Have people ever treated you differently, and you believe it’s because of your hair? I got teased RELENTLESSLY! Plus everyone assumes you’re angry and bitchy and a crazy person in the sack.

Theses are her comments on the “facts” I found…

# Red hair is seen on the heads of only four percent of people. Most of these exist in the U.K., the Republic of Ireland, and Australia. * I rule*

# There is a belief that redheads are prone to industrial deafness. This actually could be true as the melanocytes are found in the middle ear. *my hearing does suck*

# A 2002 study found that redhead are harder to sedate than any other people requiring twenty percent more anesthesia. Inadequate doses cause people to wake up during surgery and have increased recall of procedures. *it’s true, I always have to have extra sedation for procedures*

# An Irish judge in 2001 fined a man for disorderly conduct stating “I am a firm believer that hair coloring has an effect on temper and your coloring suggests you have a temper.”

# Redheads have always been thought untrustworthy. Judas is most always depicted as a redhead displaying the prejudice against
red hair. *LMAO*

# Adolph Hitler reportedly banned the marriages of two redheads as he feared their children would be “deviant offspring”. *And we all know how smart he was about physical appearance as it related to societal norms…*

# Red haired children have been historically branded as offspring of “unclean” sex. This has earned them taunts such as “red-knob” or “tampon tops.” *wow, just wow*

# In Denmark it is an honor to have a redheaded child. *I always knew the Danes were smarties*

# In Corsica, if you pass a redhead in the street you are to spit and turn around. *According to my Parisian man-friend Corsicans are the trailer trash of France*

# During the Spanish Inquisition flame colored hair was evidence that its owner had stolen the fire of hell and had to be burned as a witch. *I totally did that last Saturday, the stealing, not the burning*

# Russian tradition declares that red hair is both a sign that a person holds a fiery temper and craziness.

# A Russian Proverb warns “There was never a saint with red hair.” *I believe that one*

# Aristotle was known to believe that redheads were emotionally unhousebroken. *TOTALLY!*

# A French Proverb states that “redheaded women are either violent or false, and usually are both.” *How about violently false? Or falsely violent?*

One thought on “Redheaded Trouble”