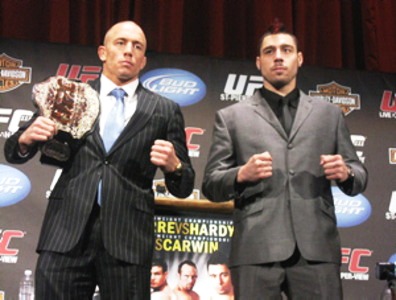 suited up and one flex away from jazz hands. photocredit: danhardymma

If you aren’t jacked up about this fight yet, watch all three of these, then come back. Oh hey! glad you could make it back! I hate to break it to anyone who thinks the underdog will prevail in this one, but maybe you didn’t watch the Primetime where GSP was balancing on a piece of wood. (2:57 mark) He has trained with the best in their fields, he has trained with masters and most importantly, he won’t let something go until he himself executes with perfection. Dan Hardy may be hungry, but GSP is not in the mood for his dinner to be snatched from him.

I know everyone wants Mir to win just so the Mir-Lesnar III will happen. I know everyone will benefit from Mir-Lesnar because those fighters being well-known. And I know that Lesnar being ringside at 111 will be crazy if the winner is Mir. But I’ll be damned if I just want to pick Carwin. That is all.

Although I’m hoping Ben could use his beard powers to lights-out Fitch, I have a feeling it will come out in Fitch’s favor.

Although I don’t usually go for guys who like to bleach their hair, I think in this case “Batman” Pellegrino will dominate Camoes.

By the law of averages I’m going with Miller here. You don’t think twice about a fighter who is from a town named SPARTA.

I hope this one gets televised, because almost as much as I love GSP, I love me some mean-mugging.

Who else is badass enough to admit this?