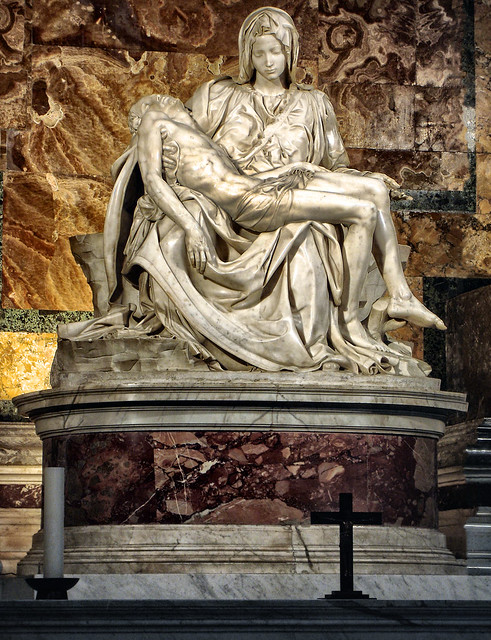 The La Pieta statues was on his casket. A tiny detail I remember because of my friend’s father telling me all about the meaning behind the statue.

Today is the twentieth anniversary of a close friend’s death.
Mark was 12; we were all 12. It was an early morning hit and run as he walked to school early, as was all our custom.

I don’t really want to talk about the details of his death, or the funeral, or that part. Because it’s hard enough to remember his voice, and the way his mind worked, the things he loved and the conversations we had. Not a month goes by I don’t think about him, and how most of us in the small “smart kids” group have stayed in touch, became adults, and have kids of our own (well, “their” own – unless you count Tortilla.)

These last couple years I have thought about him more, and I have been thinking a lot about the close friends and loved ones I have lost, a lot more lately. Of course I know death is inevitable, and I have been working on come to terms with that for a while. Not only have I seen 3 of my 4 grandparents die, but step-parent’s parents as well. An extended grandparent mourning circle. And I take comfort in the fact that they were all old, and lived full lives, and their children carry on their legacy, and stories, and I cherish that.

I have also experienced several deaths in my life that have been sudden, unexpected, and gutting.

Even as a 12 year old kid, I knew that Mark’s death was not fair, not expected (we lived in the northern part of a what was then sleepy suburb), and wouldn’t leave me.

I thought that grieving was something that you “get over” with time, like a break up, or a papercut. But I was 12, what the fuck did I know?

As more people I cling onto die, I realize that for every single person alive, and for each person they lose, the grief and mourning is different. Endless parallel universes of loss.

I wish I could have gone to see every single new Star Wars movie with Mark, and talk about them ad infinitum. I think about the rest of us “dorks,” going to high school, prom, gettings cars, losing our virginity, spending so much time on the internet, finding “careers” (long term careers are another post entirely), finding lovers, breaking up, food trucks, fancy dinners you can actually pay for, traveling the world to climb mountains just for fun, siblings having kids. I want to share that with him, and I guess, when I think about him, I do.

But I have no doubt he would still tell me I belong on the “Funny Farm.”